To start with a completely different subject ….

I would love you to come and watch my cookery demo at the Game Fair at 12 pm on Saturday 29th July. I will be sharing some delicious ideas on what to do with game along with cookery writer Tim Maddams. The Game Fair is at Hatfield House (just 20 min by train from London Kings Cross) and is a fantastic day out for anyone interested in the countryside, shooting, fishing , horses, dogs, falconry and of course food !

Meanwhile back in the USA….

He had been quietly fiddling with it for at least ten minutes without the desired effect and being British I wasn’t sure what was the polite thing to do. Do I offer to help or is it one of those things you just leave them to until you see their rod waving high in the air ready for action? 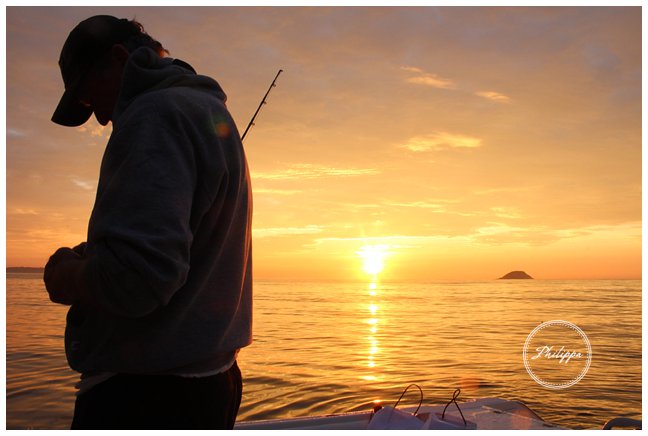 Fortunately for me, soon after this confession he had it all sorted and was merrily casting his line out to sea and was ready to help me do the same. It had been a 4.30 am start at the harbour, loading the boat with the nets and thingamajiggies , OK it was too early to pay total attaention and write notes but there were more bits of stuff than was needed to catch fish. We set out onto the big blue and watched the sunrise which frankly would have been reward enough for getting up that early. 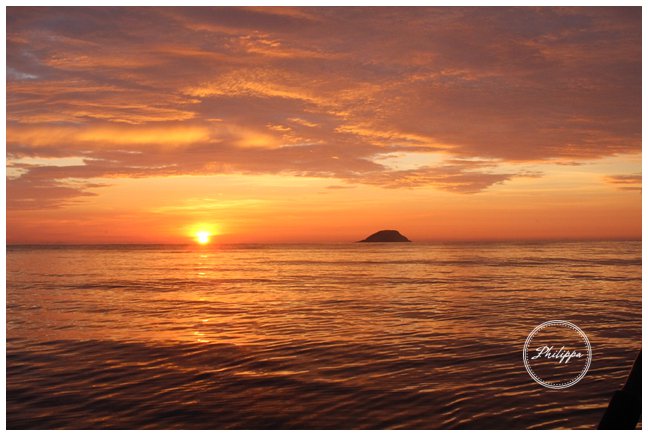 My fishing companions had been doing this for years, and one, a professional lobster catcher (he has 800 traps), loves this so much he even gets up really early to go and ‘play’ on the sea on his day off. I could see the theraputic side of drifting out on the ocean calmly watching the horizon, watching your reel to see if there are any sudden movements signalling you may be about to net a big one. The banter was gentle and I was aware that I was in basic ‘man shed’ terratory so refrained from asking too many questions but they both seemed happy to let me join in on their fun. 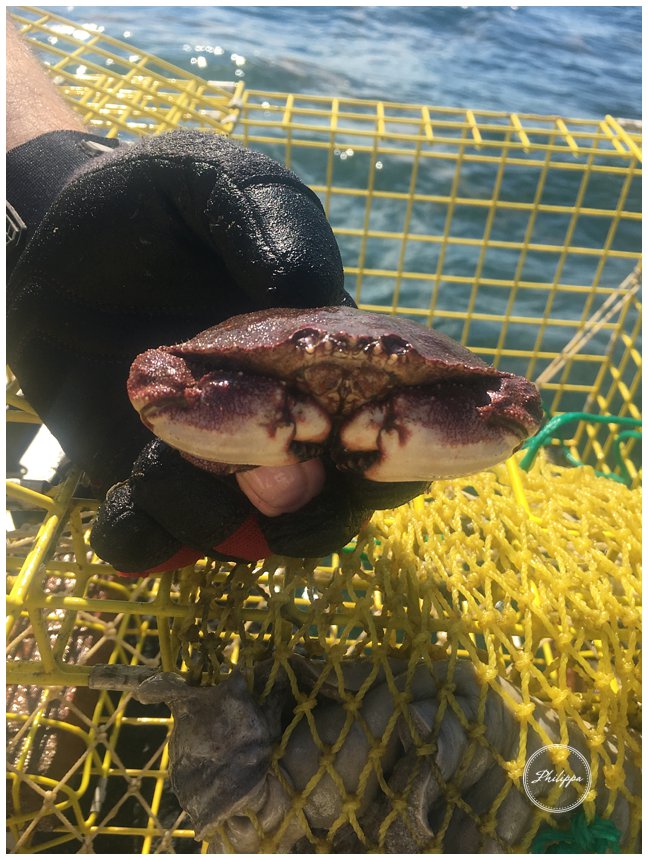 To catch a striped bass they suggested we catch some makerel first to use as live bait. That bit was pretty easy as they seemed to jump onto the bright lures within minutes of casting it into the chilly water. You then have to pierce the mackerel with the hook through its back to keep it alive to act as bait for the bass – I think that’s what the Lion King’s, ‘circle of life’ song was basically all about. To earn my place in the ‘floating man shed’ and beacuase I really wanted to catch a bass I had no qualms at hooking up the mackerel and throwing them back in the sea to attract the bass. 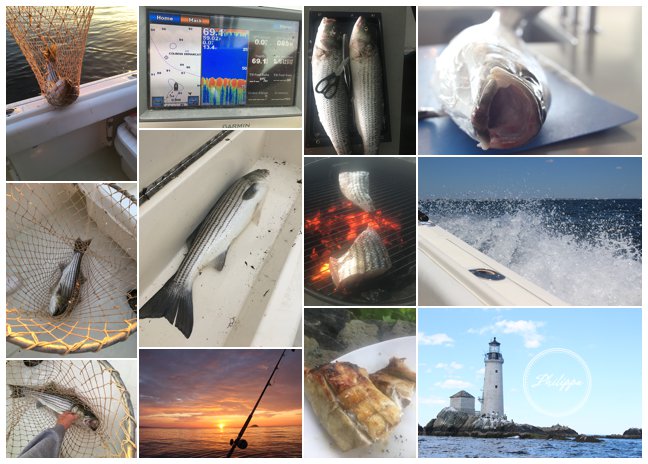 We then let the mackerel swim off (line attatched) having had intel from fellow fishing friends roughly where in the sea the bass were, and waited. and waited…and waited….and yes apparently waiting was big part of fishing…. 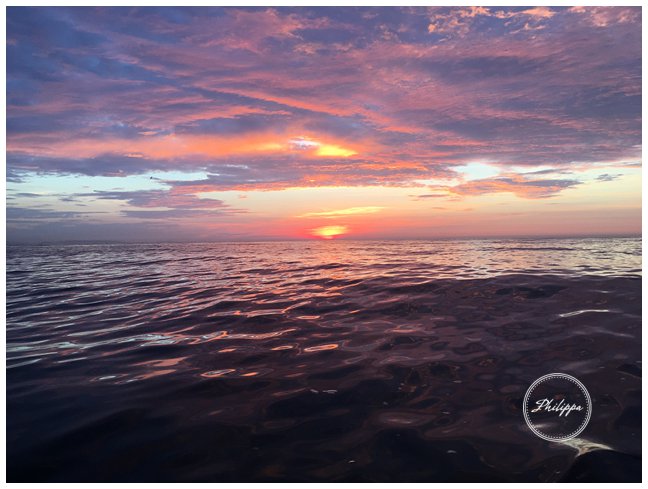 One of lines then started to shoot out. We had caught one ! The trick is then to slowly tighten its leash then reeling it in. Obvioulsy the bigger they are the harder it is and you want to tire them out a bit before getting them close enough to scoop them up in your net and into the boat. This year they had to be at least 27cm long to keep and with our permits we were only alloewed to catch one each. 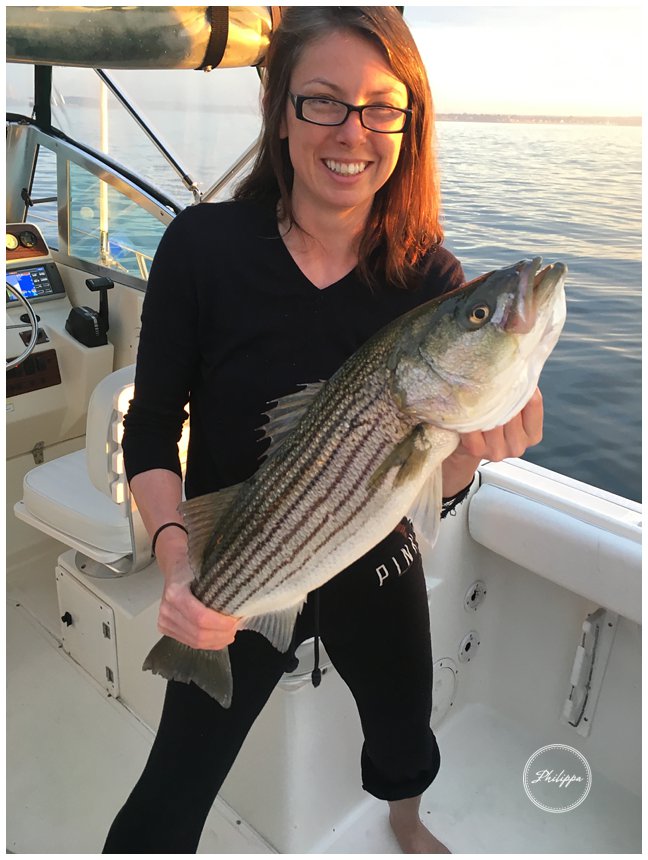 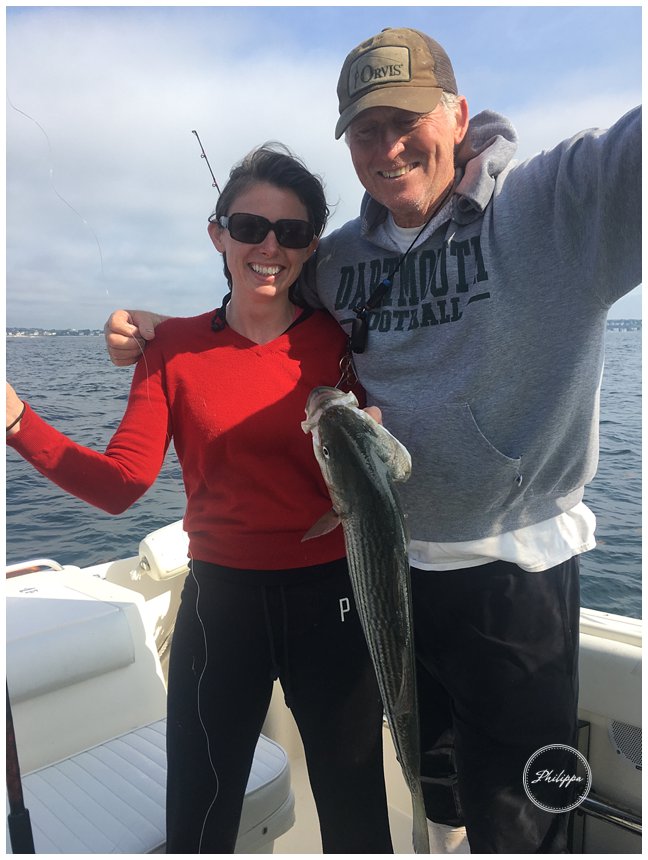 When my line began to zoom out and I had the fish versus lady fight to bring him in, all that waiting seemed more than worth it especially when my beauty was plopped into the boat and measured. You have to hold them by the gills or their teeth will leave quite a mark on you and you obviously need to be as gentle as possible especially if you are throwing them back.

After I had finally popped my fishing cherry… if that’s the correct terminology, we headed back to shore and I got to decide what we were going to do with them.

Possibly overexcited, I decided we could have them four ways:

Steamed with soy and ginger. 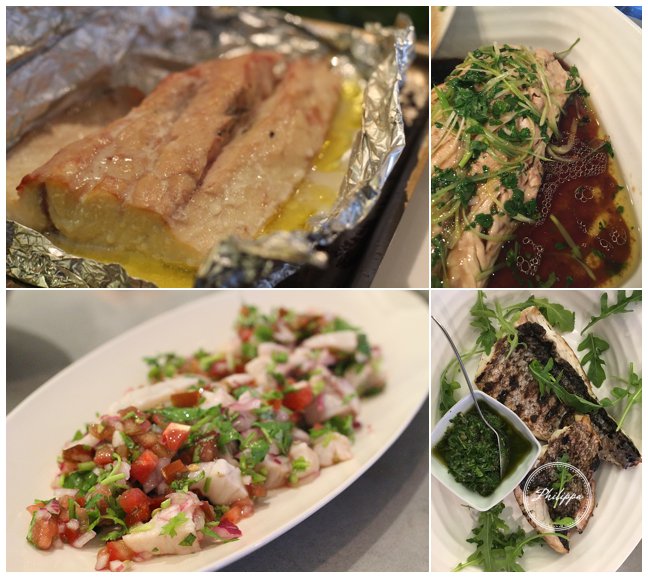 Each dish was all the more delicious having caught the fish ourselves and it seemed very satisfactory that we caught it at sun up and ate it at sundown. 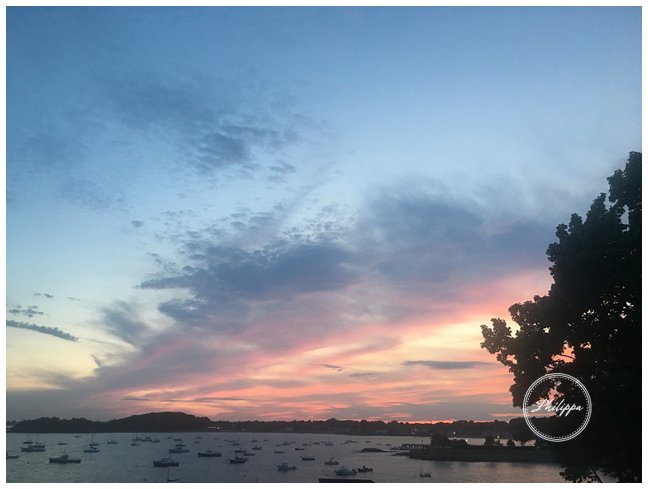 This postcard recipe however celebrates another prize ingredient that is in its prime right now…the cherry. 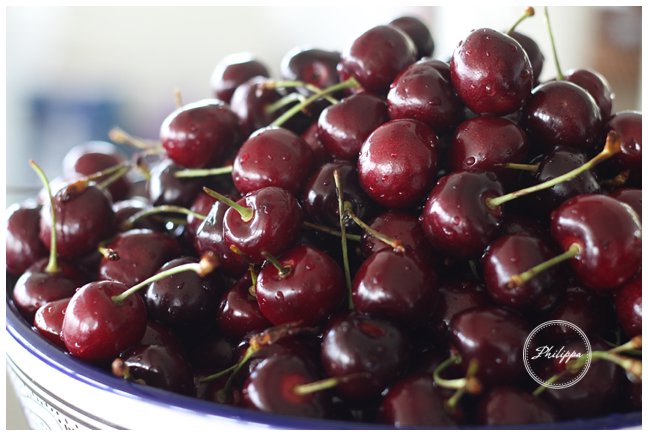 My favourite cherry facts are…

Cherries are members of the rose family and have a very short fruiting season, so get lots when you them!

For those numerically persuaded a mature cherry tree produces on average about 7000 cherries which will make about 28 pies.

Glacé cherries are generally left for about two weeks longer on the tree to sweeten them up.

Cherries with alkaline ( like baking powder ) react and make baked product go blue. You can help prevent this by adding acids like lemon or sour cream into the mix.

The furthest a cherry stone has been spat is 28.51 yards by ‘Young Gun’ a.k.a Brian.

…actually although totally un-lady like cherry stone spiting is quite a fun activity on a sunny afternoon and I’m not bad at it.

I’m driving : an all American Chevrolet

We ate: 9 kilos of cherries

I love: fishing for striped bass

We cooked : 70 lobsters…yes 70 but they are as common as sardines here.

Every home should have : a fishing rod 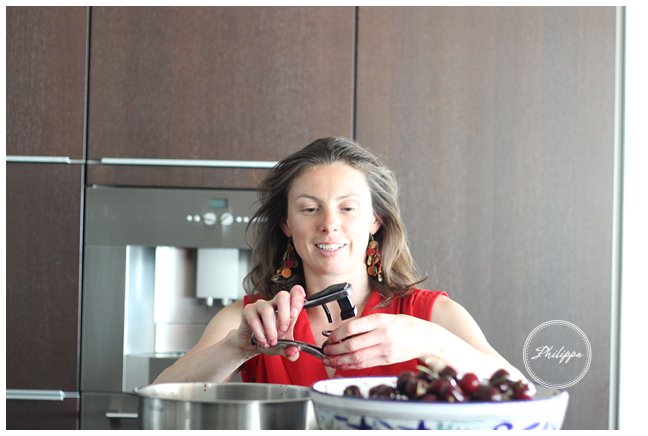 Pastry – or pie crust as the Americans would call it

To make the pastry

Blitz the flour, almonds and sugar in a machine then grate in the butter and add the orange zest. Blitz for a few more seconds until it starts to form a ball, you may need to add a few drops of water.

Roll out half to line your pie dish, prick it with a fork then leave in the fridge to rest for 30 mins.

destone your cherries and toss through the orange juice and kirsch.

In a saucepan add the cherries, sugar and vanilla. Cook for about 15 – 20 mins, the cherries should release their juices.

In a cup mix the cornflour with 2 tbs water then stir into the cherries.

The mix will become thick.

Take off the heat and allow to cool.

Pour into the pie dish,

Roll out the rest of pastry and top the pie, forking the edges to seal.

Glaze the pie by brushing with the egg yolk mix and sprinkle with caster sugar.

Bake for 40 mins or until the pie is golden 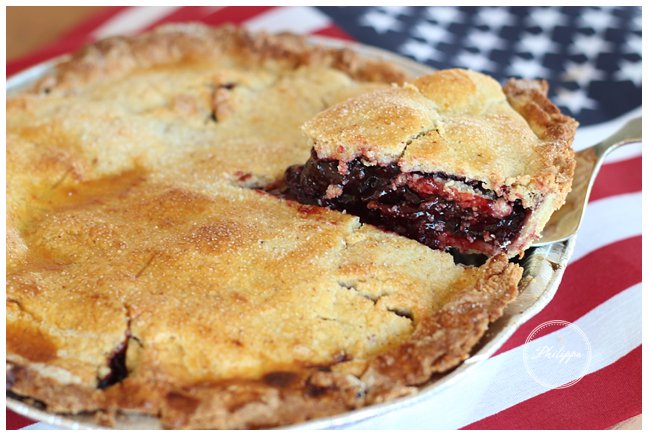