Uzès charm from every door. 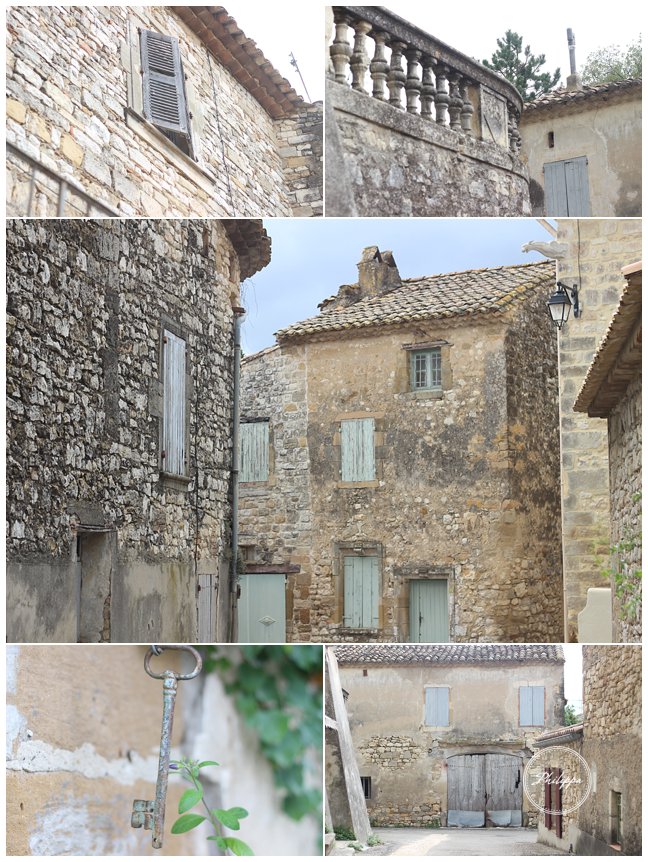 On the wild off-chance you didn’t spend your childhood watching My Fair Lady,             “Oozing charm from every pore” is a line from one of Professor Higgins’ numbers. I would heartily recommend the movie if you haven’t seen it in a while and enjoy a good sing along. This tune was not however what I have just spent the week listening to… 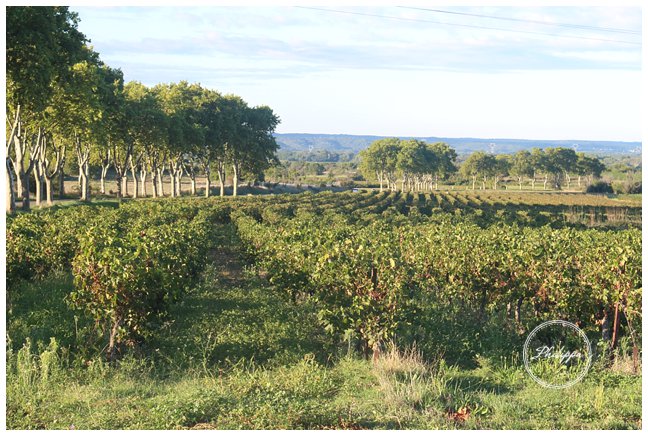 I arrived to the Languedoc region in the South of France to one of the small but very pretty villages just outside Uzés, a day before my clients. This doesn’t often happen but I have to say it was a change not having to do a mad first dash to the shops and get supper on the table for a gaggle of hungry people within 3 hours of landing (though of course those circumstances are not without their great elements of fun). The job was to cook for a group of friends that had been holidaying for a week together for the last 16 years. 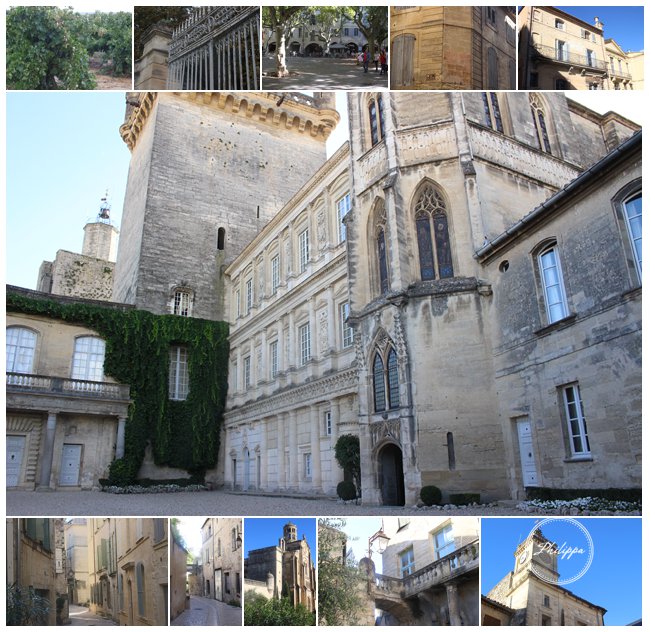 With no one in the house for the first 12 hours it occurred to me I could have carte blanche on the sound system. I then discovered that there was no internet and only 3 cds to choose from. Still with Frank, Abba and Mr Morrison to keep me company while I got the prep underway and laid the table ready for the guest’s arrival the time flew by. 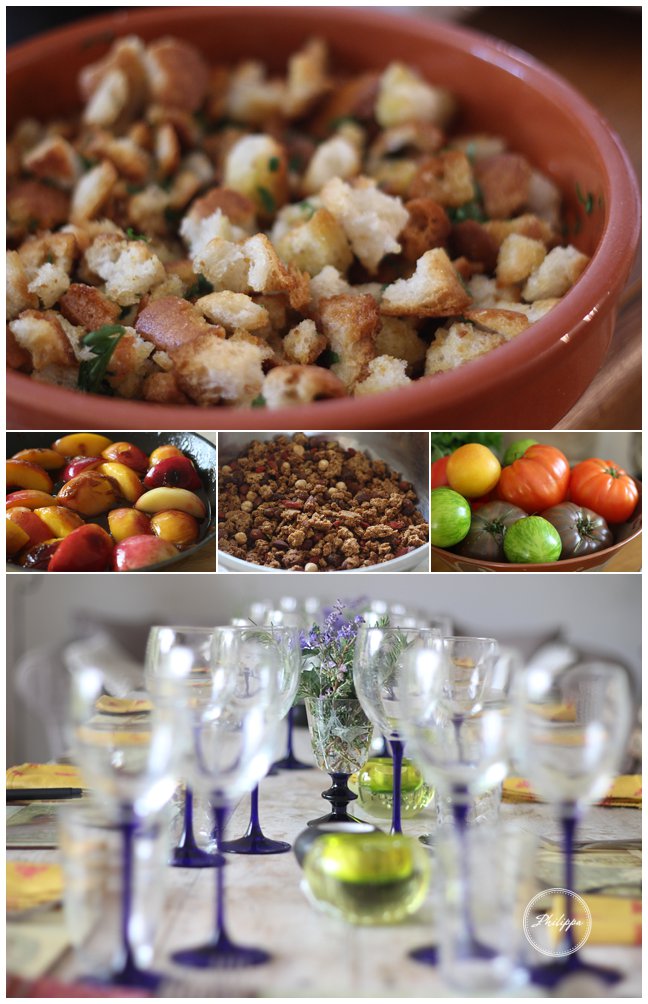 As the week went by it rather amused me that by the last day at some point or other all of the guests had commented on how much I must like Frank Sinatra.

I finally replied to the host that yes I do like Frank but there are only 3 cds to choose from.

“What about the big shelf of them by the cupboard?” she replied.

Fortunately I was much more on the ball when it came to the food. 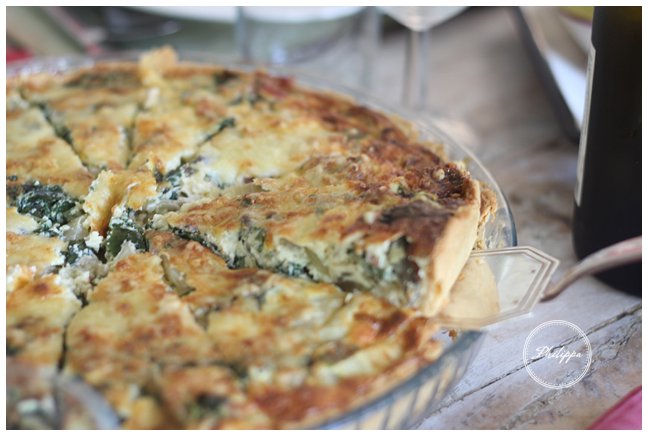 After morning one, I made an executive decision to change alliance from the local bakery to the one in the adjoining village due to distressingly below par croissants. I find it a slightly dream shattering reality that this is the third bad bakery I’ve come across this year in France and find it hard to believe that the locals haven’t started a riot. Actually in two of the cases the bread was still very good so perhaps locals don’t really eat croissants and only care about their daily baguette. 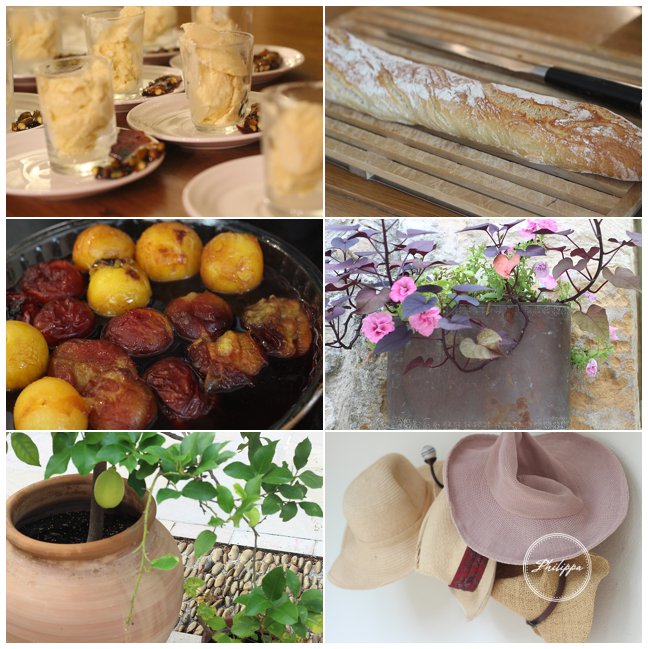 I have learnt that in France between the hours of 7 am – and 8 30 am, when most people do their bread run, that there are no rules on the road within 50 m each way of the boulungere -park wherever you like in which ever direction, and not to worry about blocking people in or cutting them off, as what is important is that we all get our morning fix of dough. 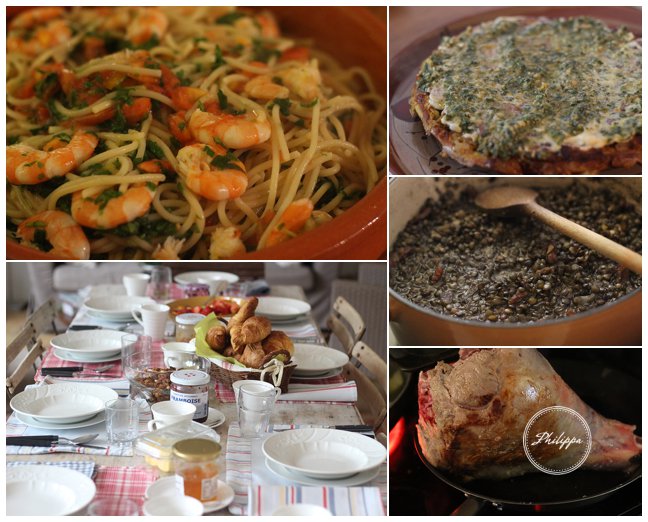 As for the Markets I felt totally on form as not only did I triumph in buying the most beautiful stashes of chanterllles mushrooms but I am also proud to announce I feel I have truly mastered the art of beating the elderly female French shoppers at their own game. Let me explain. 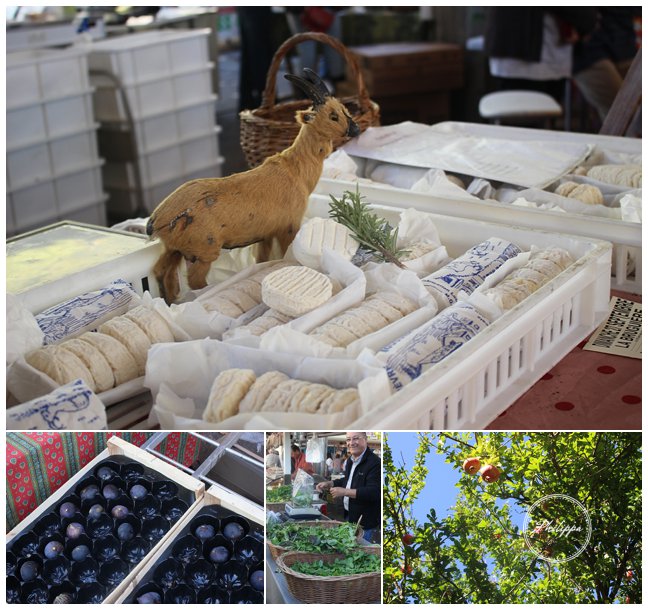 Picture the scene, a bustling charming southern French market, the sun is hopefully shooting bursts of dappled light through the plain trees onto the various tables and boxes of local goodies. I am there early with the locals (golden rule number one of market shopping) and am standing in line, probably wearing a bright summer dress and some oversized earrings. I wait till it is fairly my turn to place my order or pay and then some little old French lady behind me barges me out the way with their boney elbow, jumps the queue and has the bravado to give me a glass shattering death stare. Well not any more, I now dodge that arm, always make sure I make firm friendly yet assertive eye contact with the stallholder and stand my ground. This has totally worked out and so now all I have to put up with is the old French ladies tutting that I am buying the very item they wanted and that they don’t have all day. In response I bat them off with my perfected French style shrug.

(This is all said with true affection as I very much hope to be as canny as these feisty old ladies in years to come). 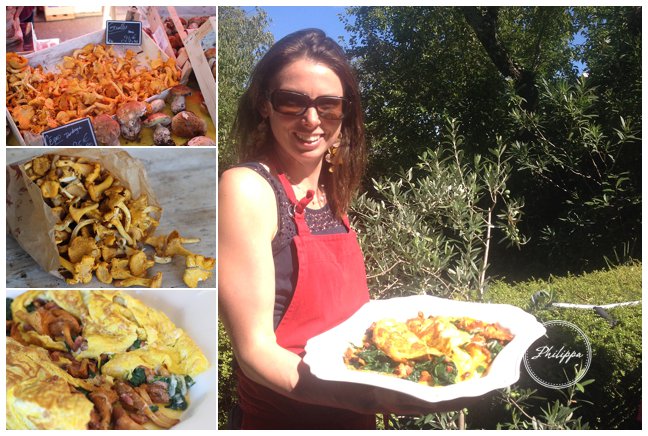 As for the cuisine, the star dish of the week may not have been the luscious chaneterlles cheese and lardon omelettes, or the chilli prawn linguini they couldn’t stop eating and possibly not even the vervaine and pistachio praline ice cream it was probably (according to the owner) his home grown grapes. 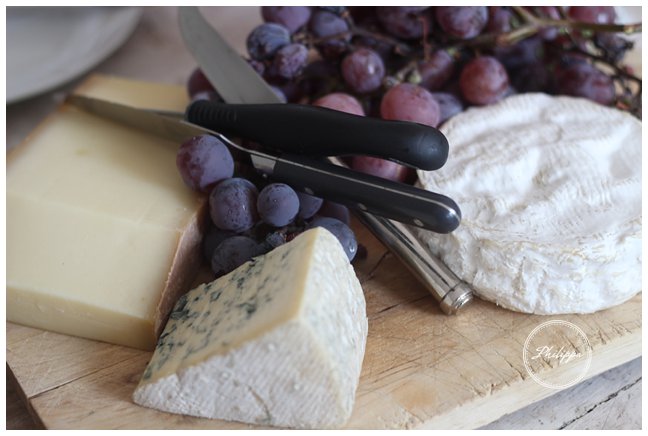 He had a point, they were perfectly ripe, very juicy and sweet, and so successful this year we all wondered about turning the land (as it happens a similar size to Petrus) into a vineyard…we shall watch that space!

In the Languedoc it is around now the farmers are harvesting their grapes for wine making and eating and at the markets I noted there were some amazing sweet and delicious varieties on offer that are well worth looking out for in your local shops back in the UK. We all noted that similar to strawberries although you can buy grapes all year round there are only certain times of year they are truly worth serving.

With several days of heavy rain we all wondered what it might do to this months harvest. After much research (well actually I just sent an email to my good friend at the amazing Yapp Brothers Wine Merchants in Mere) I learnt that, 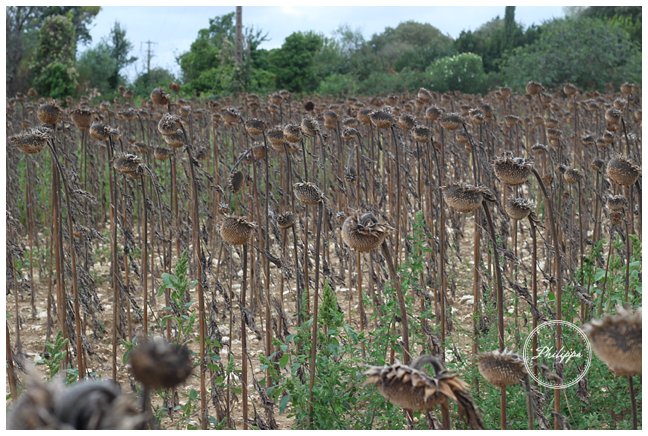 “A little rain at harvest time isn’t a major problem in a good, ripe vintage (which this one is, by all accounts) but continued and lengthy rain at harvest time would cause the grapes to swell and even split, allowing such problems as mildew, mould and other nasty things to attack and destroy the grapes. In short rain isn’t good at “vendange” time.”
The weather did turn for the better mid week so I will await with interest what this years harvest brings.

After much feasting, festivity and a few al fresco lunches the week ended all to quickly. On my way back to Montpellier airport I reflected on the dishes I cooked and which one I would like to do for this postcard recipe. Initially tempted by the bouillabaisse which went down rather well I have finally decided on the goats cheese crostini, beetroot, fig and mint salad that I had to stand my ground for to buy the ingredients.

Every home should have: their own vines (and more than 3 cds).

We are making the most of: the last of the summer peaches and tomatoes.

A major part of my job is knowing how to shop, by this I particularly mean being aware of the seasons and local specialties. When you see something that looks extra special at the market it is always worth buying and then deciding what you want to do with it. When I saw these goat’s cheeses and a tray of what I knew would be the last of this summers figs, that night’s starter just fell in to place.

2 rounds of goats cheese (a tangy one works well with the sweetness of the figs but creamy is also delicious).

4 ripe figs (green or black) cut in half.

1 head of chicory split into leaves

For the beetroot dressing

For the salad dressing

To make the beetroot dressing:

Whisk the vinegar with a pinch of salt and pepper

Then the honey and finally the olive oil.

To make the salad dressing

Whisk the vinegar with a pinch of salt and pepper.

Then whisk in the olive oil.

Turn the grill on medium

Peel and thinly slice the beetroot, use a mandolin if you have one, then toss through the beetroot dressing. Leave this to one side while you

Smear the goats cheese on top of the sliced pieces of baguette, drizzle with a little of the extra olive oil and place under the grill for a couple of minutes till they are bubbling and golden on top.

Toss the chicory, mint and figs through the salad dressing then layer on a plate with the beetroot and goats cheese toasts, sprinkle with the pomegranate seeds and serve immediately. 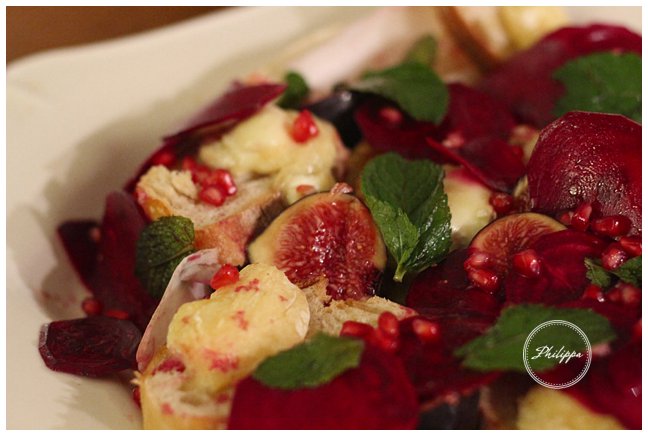 Next stop, the Wyvis Estate in the Scottish Highlands…