From an early age much of my time has been spent on and off stage so I’m well aware of what it takes to make a production run smoothly. All going well on the face of it we see the actors entering and exiting at the appropriate moments,  impressively and seamlessly remembering their lines (we hope) and brilliantly drawing us into their world.   What we tend to forget as an audience member however is how much work has to go on backstage to achieve all this.

People have been working tirelessly on costumes, props and  scenery.  Directors, musicians , techies and other crew have all shed blood, sweat and probably tears to get the show on the road and not to mention the gentle cajoling , ego massaging, support and camaraderie that has gone on to hold it all together by everyone.

What has all this got to do with venison sausage rolls I hear you ask?! And how can she possibly link this thespian theme to her latest job cooking for a Highland partridge shoot? Well…

Up on the Cawdor estate near Inverness, it’s hard not to get drawn into a dramtic mood, not least because it is the home of the Scottish Play (or Macbeth for those of you who are less superstitious). Add 42,000 acres of extraordinary Highland landscape, endlessly changing light, some of the best field sport in the country and boundless amounts of fresh air and you can understand how one can easily become theatrical. 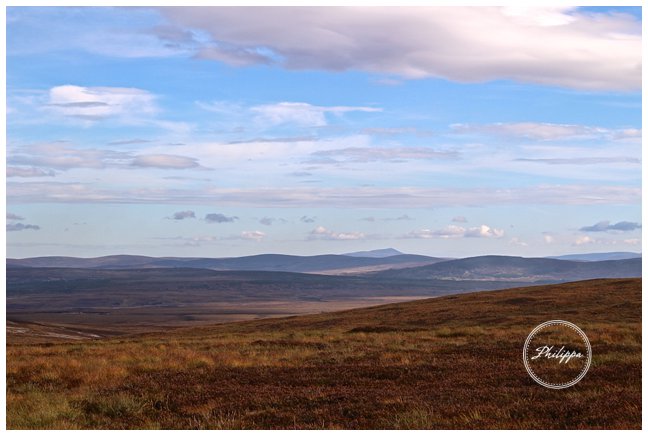 Shoot jobs are always busy as there are a lot of hungry men (and more and more so women) to feed.  Despite November being quite late in the season to still be eating outside the group was game to have their lunches up on ‘the hill’, the in the know term for on the moor.

I am always delighted to to be heading out on these adventures, braving the elements, dirt tracks and overcoming the challenges of transporting and serving a top not lunch to the middle of nowhere. The shooting crowd are definitely a set who love their food so ones efforts to go all out are always appreciated.

As the chef your day starts early in the lodge kitchen doing a big cooked breakfast and preparing the elevenses baskets for the game keeper to takeaway for the gun’s mid morning snack. Once breakfast is cleared away the preparing and packing up of a top notch lunch to be served way up on the hill can begin.

Food has to be carefully packed along with tables, tablecloths, plates, candles if the day is dark, flowers, wine (of course) and fire wood into the trusty Range Rover and driven across narrow bridges, winding tracks across babbling burns and reversed down slippery paths to a bothy hidden in the depths of the moor. Undoubtedly more fun than an office job I imagine.  Once there, everything is unloaded come rain or shine or wind (though often in Scotland a bit of all three) and set up, the wood burner lit, hot soup made ready to serve and the wine opened in anticipation for the arrival of the hungry and often cold and wet guns. 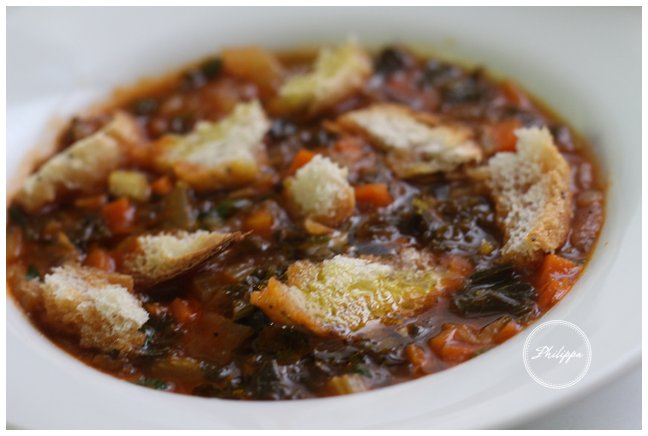 On one of the days on our way to the bothy we had to pause on the hill as the beaters (people with flags energetically waving them on command whilst walking down a hill to flush the birds towards the guns and not Harry Potter like children on broom sticks playing quidditch), were making their sweep ahead of us. 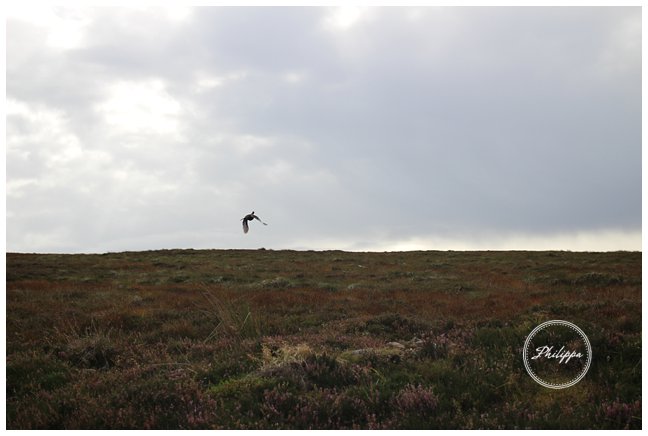 Turning on our radio to the channel that the head  keeper and beaters were using we received  instructions to wait there for a wee while longer.  Not wanting to scare the birds off course we switched off the engine and due to our remote location and therefore lack of signal to Radio 4, listened into the “ backstage” working of the shoot. 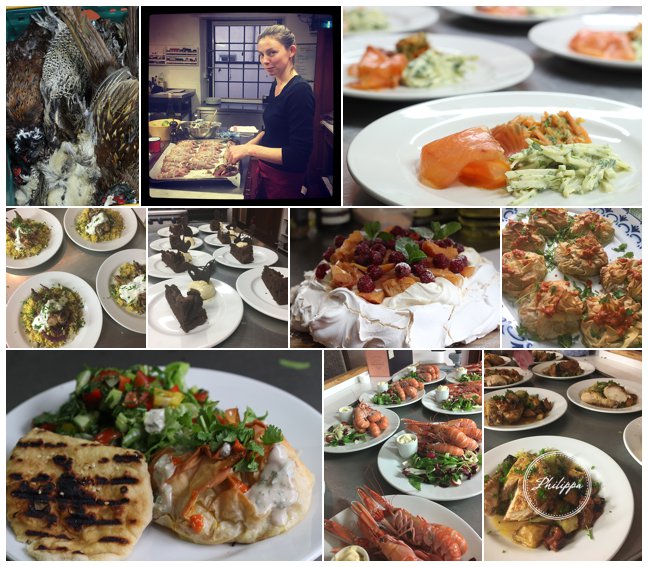 Like a director of an enormous production (think Aida on a Verona scale) the head Game keeper directs his backstage crew to flush the actors (partridge in this case) onto the stage (the area surrounding the pegs) where the eager audience (the guns) get to take their shot.

In this case however the actors (partridge) are more temperamental than the worst of divas and it takes great skill and combined effort to get them to fly where and when you want them.

Listening to the instructions was a bit like listening to the shipping forecast, you enjoy it and are strangely addicted but don’t quite understand all that is said.  None the less it was hard not to get swept up in the team effort of getting the birds in the right place and the building excitement of whether it would pay off.

“ Flag up, flag up !!!!! “ was repeated many times and moments later a flurry of flag waving from the guys and girls on the hill.

“I canny see Eion , get oot ‘o the gulley” !! also seemed to be a popular communication.

The crackly line coupled with the heavy Scottish accents meant I couldn’t follow the script exactly but the most entertaining moment was when one group of partridge was spotted flying too far left, the beaters were directed to reposition themselves sharpish to correct the flight path and I distinctly heard in My Fair Lady meets Braveheart style from one of the keepers:

The ripple of gun fire a moment later indicated the move was successful and that the guys on the hill had done a good job. Then came the sound of the horn indicating the end of the drive and our cue to get a move on to the bothy to set up lunch. 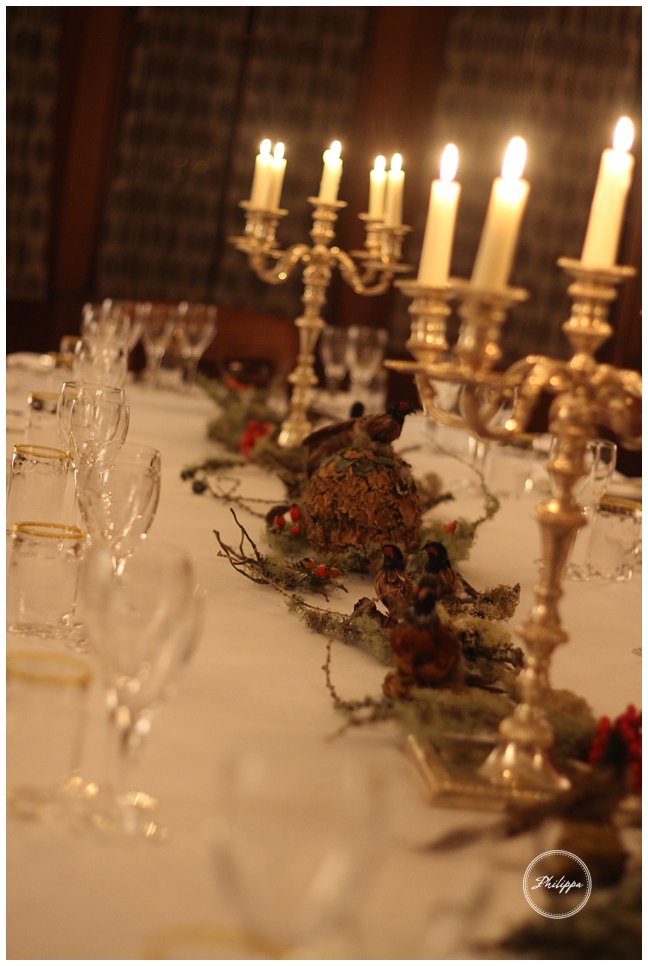 During a lunch the game keeper will inform the head of the party their current bird count ( bag), if their booked number has already been met and if it has if they would like to carry on, for a second act.  Invariably  the answer is yes, unless the weather has turned really foul, so once the feast is finished they all had back out for a few more drives.

At the end of the shoot day, once the show is over, everyone returns back to the lodge and the day’s bag is laid out for the count. The beaters, dog handlers, game keepers and guns gather round for a wee dram and exchange highlights and tales of the day and it is at this point that the backstage crew can take their bow and be thanked for a tremendous show. 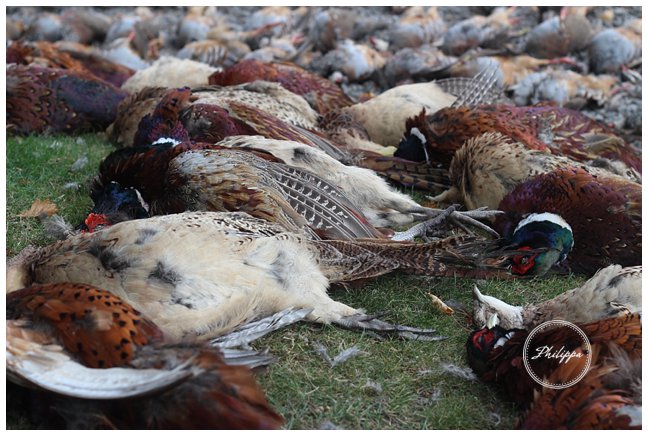 For this postcard I want to share with you my new favourite snack I like to make for the elevenses basket namely venison scotch eggs.  To qualify for a good elevenses shoot snack the food has to be able to survive  transportation, easy to eat with one hand, hearty and  suitable for ketchup or Tabasco (that’s a must according to Lord L who apparently is a connoisseur when it comes to elevenses).

Scotch eggs are totally worth making from scratch as you can get the eggs perfectly cooked ( unlike the obligatorily over cooked shop bought ones)  and the meat perfectly seasoned.

These Venison ones have the advantage that the meat is known to be full of minerals and iron and is low fat.. which in my book translates as you don’t have to feel so guilty about scoffing a whole one.  I have to say on a personal note that when Lord L is not looking you should also try it with crab apple jelly as its mix of tart and sweetness pairs beautifully with game flavours. 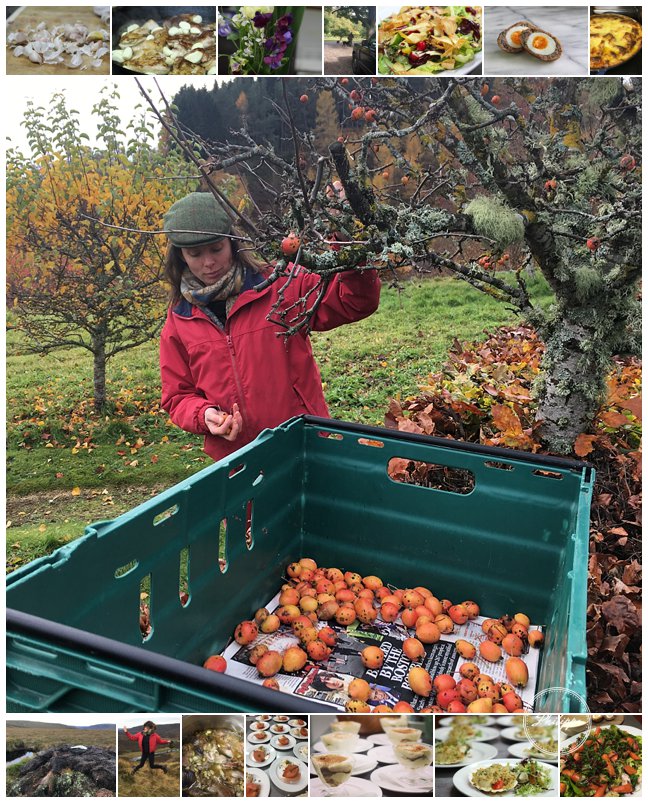 Every home should have: A piper

Butter usage : off the charts

Bring a pan of salted water to the boil.

Gently plop 8 eggs in and cook on a high heat for 7 minutes.

Gently drain and fill the pan with cold water and a few handfuls of ice.

Once the eggs are cool peel them.

In a large bowl season the venison mince with salt and pepper.

Break the bread into bits, crust and all, and splash on some milk and 1 raw egg. Mush about then mix well into the mince ( if you are feeling fancy you can add 2 cloves finely ground clove and 1 tbs of finely chopped parsley but for me home made venison scotch egg is excitement enough).

Take 1/8 of the mince and wrap around 1 of the cooked eggs. It is easier if your hands are wet.

Repeat with the other eggs.

Then break the last egg into a bowl and add a splash of milk and beat.

Dip each of the meat wrapped eggs into the cornflour, then egg mix then breadcrumbs. 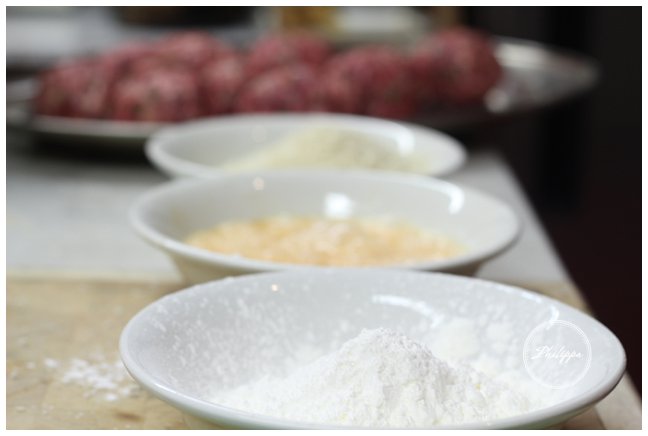 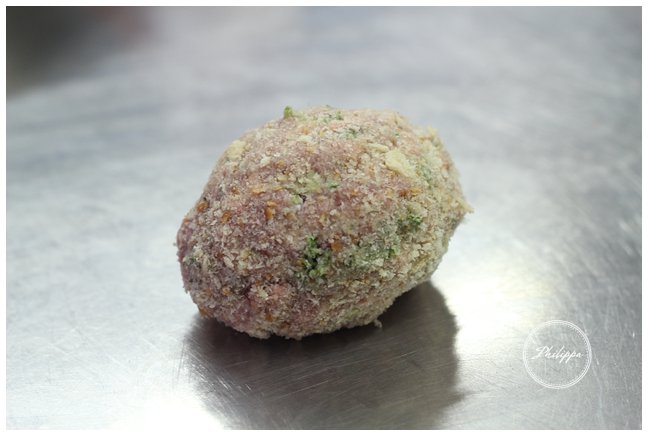 Heat your oil in a deep pan, When hot ( a small lump of bread when dropped in should go brown and crispy in seconds) fry the eggs individually until golden ( a minute or so) then lay on a flat baking tray nicely spread apart.

Remove and transfer onto a wire rack to cool a little.

Eat warm or cold as the perfect elevenses snack. 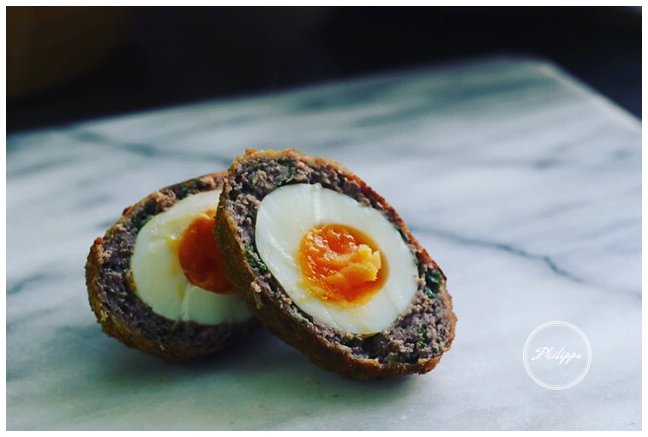