When most families pack a car and set off on their holidays it is not unusual for them to go through last minute panic checks:

“Did you turn off the lights”!?

“Did you lock the back door”?!

“Did we remember all the kids?”?

So it was much to my amusement when we set off, car full of kids, bags, flippers and beach balls that client A exclaims:

“Stop the car! Did you remember to load the Olive oil?!”

It’s going to be my kind of trip I thought as client B assures client A that yes all 17 litres of the stuff is on board and safety packed.  Ready to roll we made the journey from Athens onto the ferry that would sail us to Paros. Getting a car ferry to the Greek islands was one of the most confusing and seemingly pot luck travel adventures I’ve ever been a part of and one day can have a post all to itself… when I’ve figured out how it actually all worked out. 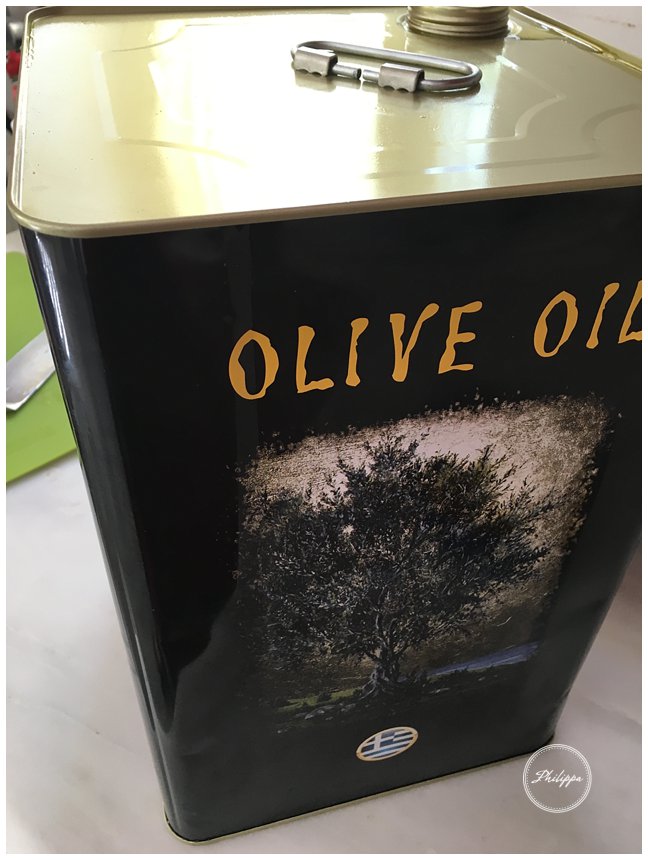 As I write this on the flight back from Athens I have been flicking through my photos of Paros from the last two weeks and have been struck by several things.

1)The brilliant white that gleams off every building (similar to my skin tone apparently the day I arrived).

2)The variety of produce Paros produces including most things from grapes to goats.

4) It looks like I developed a soft spot for ouzo (though not sure if this will travel back with me to the UK as although it works extremely well in the lingering heat of the Grecian evening sun I’m not sure it will have quite the same effect in Dorset). 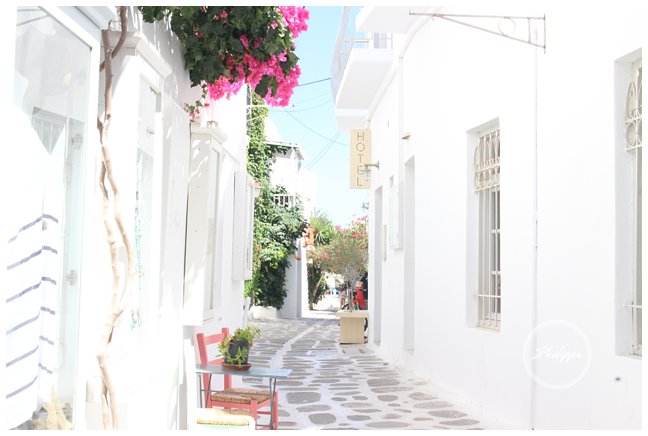 Ouzo here is often drunk before dinner on ice with splashes of water. My extensive research concludes it works incredibly well with taramaslata and grilled octopus. The octopus interestingly are caught and killed then beaten to tenderise them before being left to dry in the sun.  You can often see them draped over poles by the beach and above restaurants and bars. When cooked and simply grilled then tossed in a splash of vinegar, lemon juice, dill and olive oil they make the most perfect aperitif. 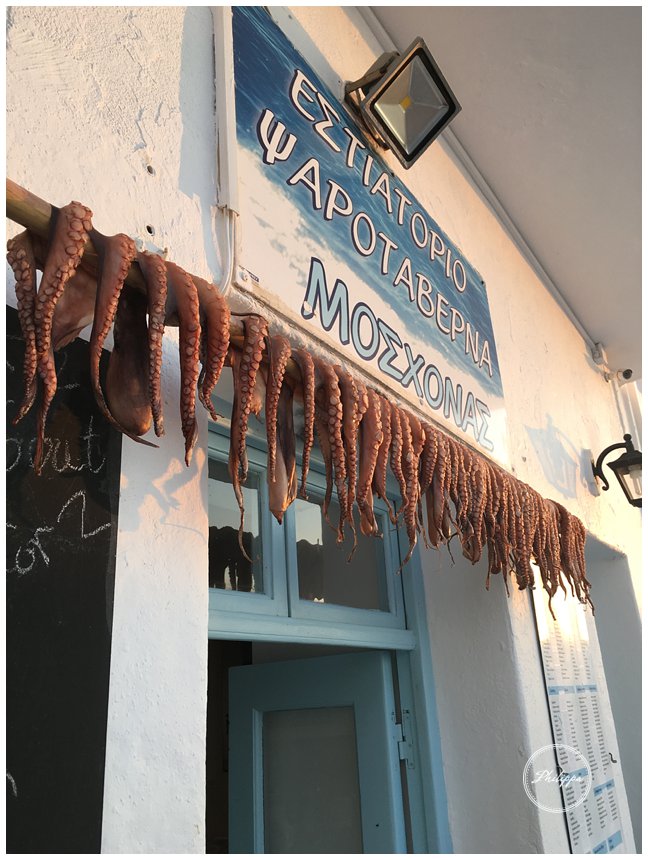 Sea urchins I noticed are also very popular and made regular appearances on menus. They can  be served simply with olive oil or my new favourite way, scooped out and served on half a lemon. To eat it you gently scrape your spoon across thereby gathering up the sea urchin and getting a delightful balanced twang of lemon. Perfect. 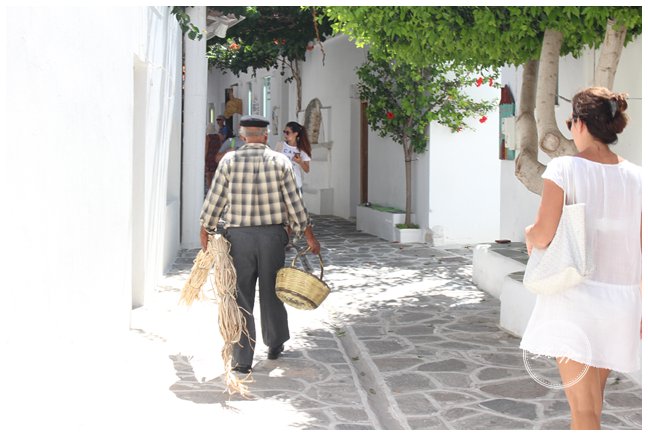 Obviously I wasn’t just bought out here to enjoy the sun, sea and ouzo, I was also here to cook. When I first arrived at the villa there were half-hearted mutterings from some of the group that they were afraid they would pile on a few pounds having read some of my heartier statistics from postcards earlier on in the year. I think they were referring to the 1 ½ packs of butter, 500ml double cream and 5 eggs per person per day scenarios that occasionally seem to occur. Fear not, I said as I was totally geared up and ready to start on my summer inspired salads, grills and healthier desserts and of course replacing as far as possible butter with Greek extra virgin Olive oil. 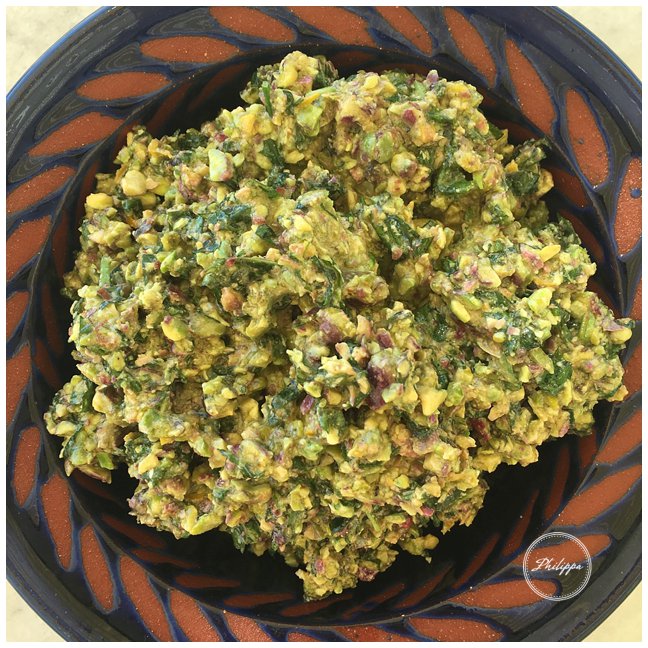 Menus involved using lots of the all locally produced vegetables, fruits and meats.  Unfortunately there was no fish as the sea was too rough due to the high winds, although as consolation the wind in tandem with the dazzling sun made for perfect summer weather and saved us all from being fried alive.  I noted the fisherman, whom we visited every other day at the port, didn’t seem too distressed and were quite happy spending their morning drinking coffee, smoking their Karelia and mending their nets. 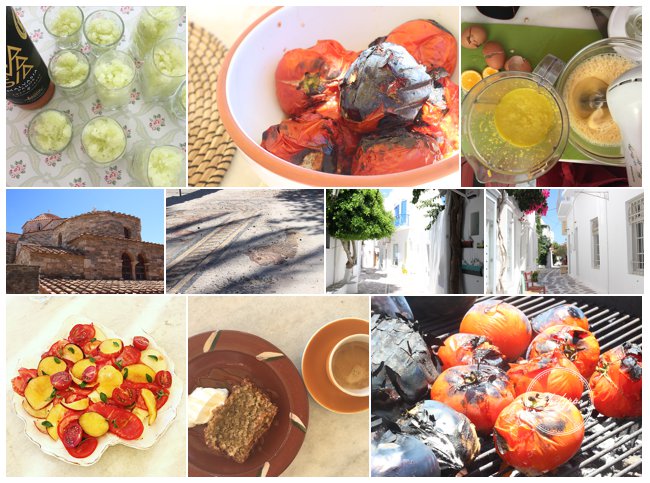 Food was kept light, refreshing and although I didn’t  specifically set out to make it focused on healthy it naturally is when cooking with Mediterranean summer ingredients.

With every day a guaranteed scorcher it was important the food remained not too heavy and so besides including a lot of salad and vegetable centric dishes on the menus with the lack of fish I kept meat dishes light by grilling or slow cooking them with lots of herbs, zests and healthy sloshes of the impressive Paros white wine.

The local butcher, who turned out to be quite the character,  supplied meat only reared on Paros and although he did not offer a  great variety it was mostly top quality.  He assured me goat meat  is very popular on the island, which was of no surprise as when driving around you can see the hills are littered with them,  but I admit I turned it down as the ones he offered looked very scrawny . Their pork and 41 day aged beef ( thats almost twice the time beef is generally hung in the UK) however was excellent and perfect for the BBQ. 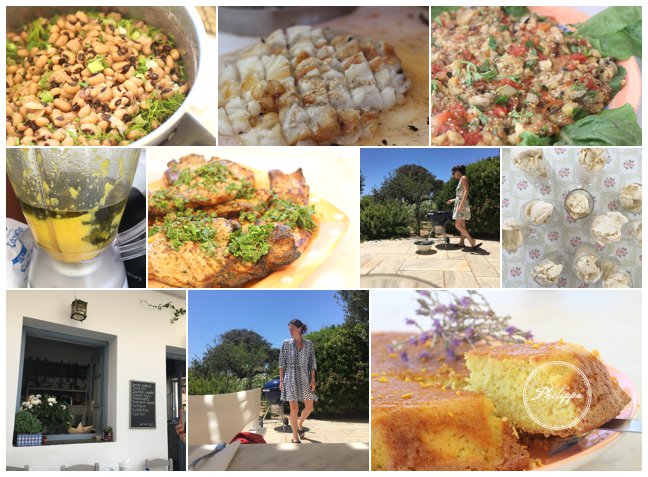 One of my favourite things about being a chef who gets to travel extensively is rather than the normal situation of staying in situ and trying to find the top foods that have been imported, it is me being shipped out to find the top ingredients from the local suppliers.

Take for instance the kalamata olives. My client and I ( she liked to come with me to the shops as food really is her thing) bought a bag from the local veg shop, she nudged me and predicted I was going to LOVE these. I admit I was slightly unmoved at the time as kalamata olives are hardly a rare sight these days.  When seven O’Clock came and the ouzo, ice and nibbles were gathered I placed a little bowl of these black beauties on the tray, saving one ( or two) to pop in my mouth to try.

‘Surprise” the olives yelled as they bust open in my mouth, filling it with a rich creamy yet clean sensation, ” you won’t forget us in a hurry” they muttered as the delightfully meaty olive taste lingered for several minutes longer ( and no, the olives were not talking to me because I had had one too many ouzos ). 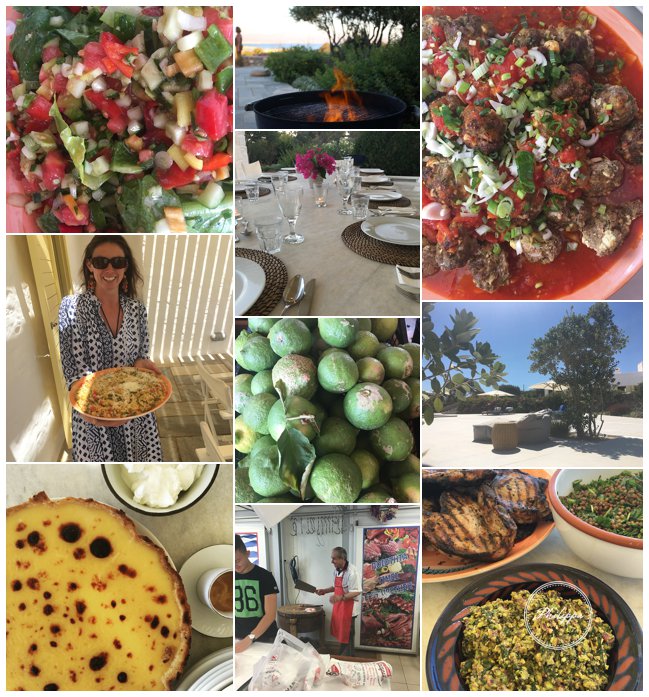 The  brilliant white feta ( less chatty than the olives but sensational none the less) which is served from big barrels and chunks sliced off to order, was again nothing like I had tried back home. All the nuts we bought were fresh, crunchy and full of flavour especially the pistachios and almonds and the plump caper berries were so moreish the kids, also keen on them,  threatened to hide the pot from me.

The star of the show/kitchen however had to ultimately be… the Greek extra virgin olive oil.

I had to confess to my client, who is Greek, that I really hadn’t used it much as from my days at the River Café I had been firmly swayed/indoctrinated towards the Italian stuff.  I was calmly sat down and the lectures ( fascinating and in good spirit) began…

Globally the production and sale of olive oil is a murky and not quite so liquid green gold world  with many troubles, grey areas and mysteries. For instance Italy sells far more Italian extra virgin olive oil than it can actually produce (I was told that 60% of Greek olive oil is shipped too Italy and then sold as Italian).  You would not guess from looking on the shop shelves back home but Greece is the worlds third largest producer.  As the rest of the family joined in about the merits of Greek olive oil above, the gesticulating got more flamboyant and my eye kept catching the light coating the olive branches in the garden it was hard not to be sucked in and become a complete convert.  I suspect however it would only take a five minute walk through an olive grove in Provence to remind that there are in fact quite a few places you can obtain delicious olive oil, you just have to be prepared to pay for it.

As price is often the main driving factor in our purchasing decisions it is worth knowing that the cheaper extra virgin olive oils are often sourced by trucks going around various farms / co ops sucking up anything left in the large barrels ( so unknown age/ quality ) then mixing, filtering before bottling and selling it on.  The growing, harvesting and pressing involved is not without its difficulties and so it is not surprising that if you want a quality one it will be comparatively expensive. Once you taste the good stuff however it is hard to want to use anything else.

If you are interested in reading more into the scandalous and marvellous world of olive oil I suggest the book Extra Virginity by Tom Mueller.

As my client grows, harvests and makes some top quality extra virgin olive oil it was not surprising we had brought enough to practically bathe in.  We did however  manage to resist the temptation and stick to the Aegean sea for that urge and keep all the oil for cooking.

It was used not only for the obvious things like cooked meats, vegetables and making dressings but also in various desserts and cakes.

For this postcard recipe I want to share with you one of the cakes I made for afternoon tea that although may not have helped us in Greece with any lightening of the figures, it uses olive oil rather than butter and mostly honey rather than sugar so seemed a good comprise for a treat. 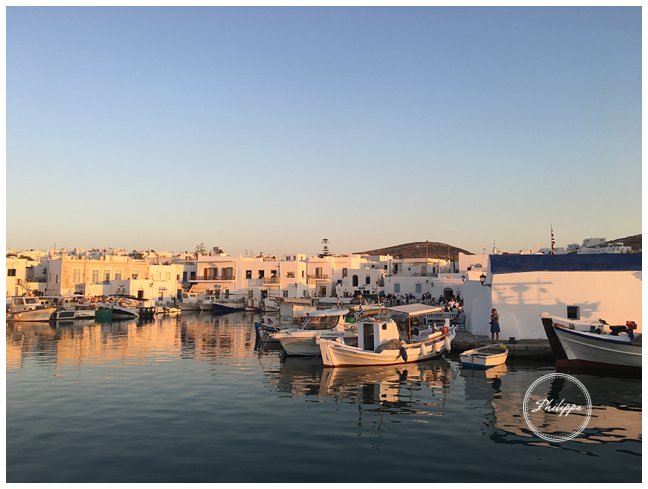 I’m reading : The Diary of a Provincial Lady by EM Delafield

Every Greek villa should have: caper berry bushes 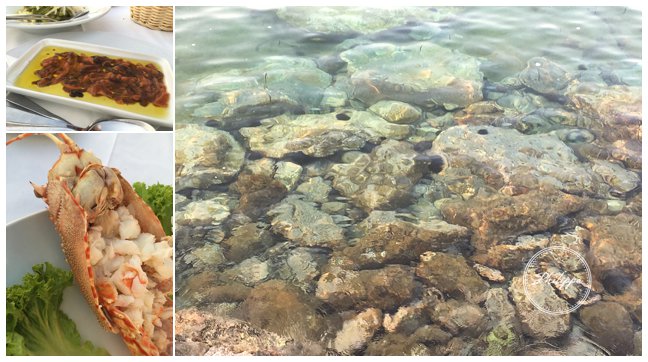 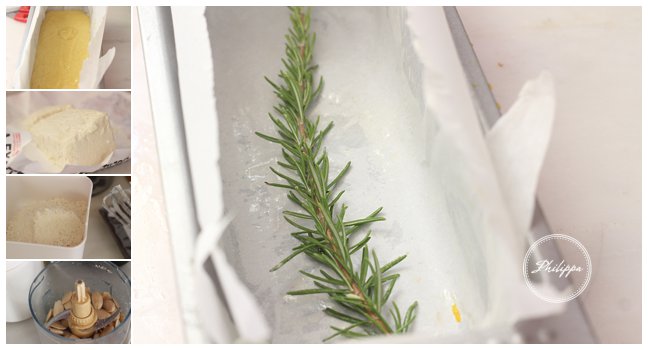 1)Line a 2 lb loaf tin with baking parchment and place the sprig of rosemary at the bottom.

2)In a bowl whisk together the flour, baking powder and ground almonds.

3)In a separate bowl whisk together the sugar and eggs until pale and thick ( about 3 minutes if using an electric whisk) then mix in the olive oil, honey , vanilla seeds, orange zest and juice.

4)Gradually mix the eggs into the flour mixture and stir until you have a smooth batter.

5)Pour into the tin and bake on a lower shelf for 40 – 5o mins or until a skewer comes out clean.

6)Leave to cool for 10 minutes in the tin then turn out onto a rack to cool completely. Remove the rosemary sprig

Serve with spoonfuls of Greek yogurt. 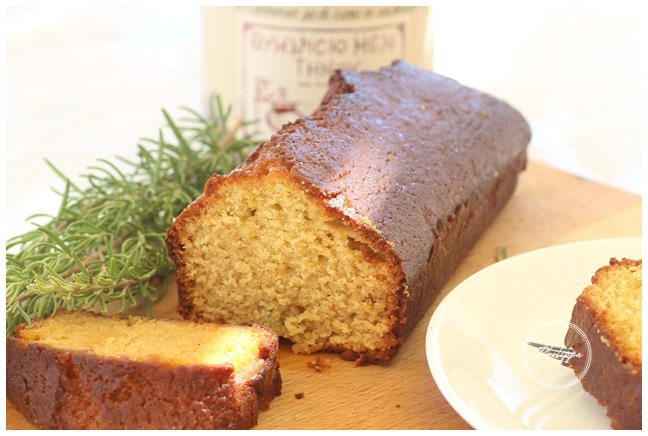 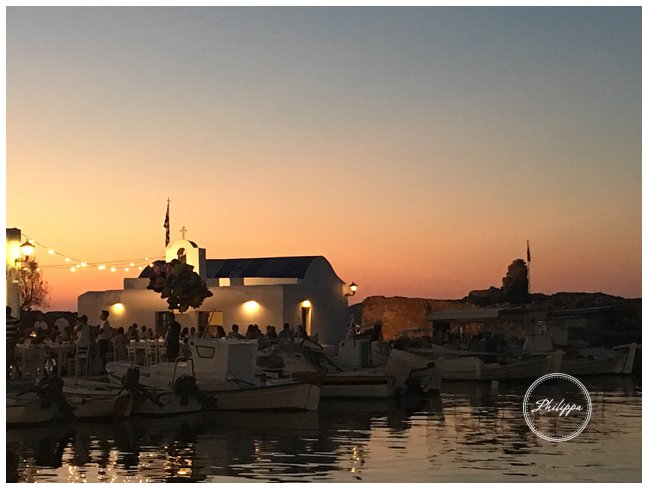